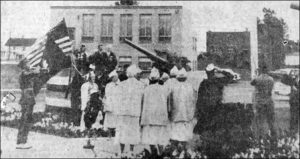 Sun newspaper featured the August 24, 1958 dedication of Brooklyn Memorial Park and the Veterans Monument, attended by more than 200, in its Aug. 28, 1958 issue. Congressman Michael A. Feighan (D-20) (white-haired gentleman on the platform) delivered the main address. The photo caption also noted that seen in the foreground are the Gold Star Mothers who unveiled the stone. The flag, which had flown over the Capitol, was raised by Commanders of local American Legion and Veterans of Foreign Wars posts. See the article in the Aug. 21, 1958 issue that detailed the dedication program. (Reprinted with permission)